Basic information about the city 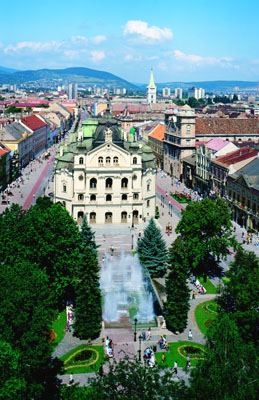 In terms of its size and importance in the Slovak Republic, the city of Košice ranks right after the capital Bratislava. It lies in the eastern part of Slovakia, not far from the borders with Hungary (20 km), Ukraine (80 km) and Poland (90 km).

The advantages of this location, near the borders of three states and lying on important domestic and international transport routes, translate into the preconditions for good commercial connectivity. This is significantly enhanced by the existing railway junction and airport with international status.

The city occupies the Košice Basin formed by the wide valley of the River Hornád, contained by the outlying ridges of the Slovakian Ore Mountains to the west and the Salt Hills to the east. The city centre lies at 208 metres above sea-level, and the climate in Košice is moderately warm with average temperatures of 19° C in July and -3° C in January.

The city is the administrative centre of the Košice Region, and is divided in itself into four Districts. As an independent legal entity it is divided into 22 city wards, each with its own local government. Overall specialist, administrative and organizational responsibilities are borne by Košice’s Municipal Authority in cooperation with the ward authorities. The city of Košice is governed by the Mayor and the City Council, and each ward also has its own elected council and council leader.

Košice has a strong economic background, and the city creates employment opportunities for the population of the surrounding region as well as its own. The biggest local employer is the U. S. Steel Košice steelworks, and of the total number of registered employees in the city as a whole, the great majority work in the industrial sphere. The education and transport sectors are also strongly represented here.

The average age of citizens is 42.4 years (2021). The education system is significantly represented in the city, with over 45 basic schools, 10 grammar schools, 4 commercial academies, and 15 specialized secondary schools covering industrial technologies, agriculture, health care and the arts. There is also the Technical University with 9 faculties, P. J. Šafárik University with 5 faculties, the University of Economics and the University of Veterinary Medicine.

There are 14 banks in the city, running a combined total of 43 branches