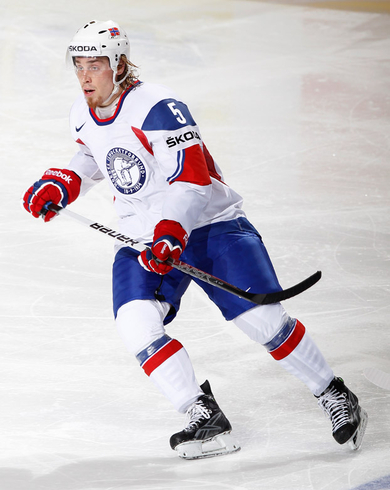 KOSICE – The name Koivu is famous in hockey because of Saku and his younger brother, Mikko, but there is another player with that surname playing at the World Championship this year – for Norway.

Eerikki Koivu was born in Finland but last year got his Norwegian passport and was immediately asked to play for the national team when he got the chance. He accepted. And now, he is playing at his first international event at the age of 31, for a different country, and loving it.

"I was pretty young when I started to play hockey," he started. "I have pictures of me holding a hockey stick when I was just learning to stand. I was about ten months old. I started skating when I was two and a half years old, and I started playing in a league in Rauma when I was five years old."

Koivu was an athletic kid who loved playing sports year 'round, but in good time he decided to focus on hockey without thinking about how good he was or what his potential was.

"I still don't know if I'm good enough to play," he said with a laugh. "I was about 15 when I was still playing football and Finnish baseball, and bandy, but hockey was my favourite, so I just chose to focus on it. I never had much of a career path, so it just sort of happened that I became a professional."

Indeed, Koivu became good enough to play in the junior leagues in Finland, but he was never asked to play for the U18 or U20 national team, so instead he went to France in the fall of 2000, when he was 20, and played for Angers for two years.

"I didn't have many options," he explained, "but they called me. Somebody knew somebody and he knew somebody who knew me and they asked me to play in France. I said, why not? I have nothing else to do."

And so, almost out of nothing, a career happened. "In terms of my career and a hockey life, France is where I really started," Koivu continued. "I had to leave my comfort zone, learn a new language, different culture, and learn to take care of myself. That included hockey. Our coach was French and we played only once a week, so I had to be my own coach in a lot of ways, and sit down and watch the videos and study the game as much as I could. We had a lot of time to practise. It was a good career move, but at the time I didn't think of it like that."

Koivu also grew and bulked up, reaching a height of 190 cm (6'3") and weight of 100 kg (220 lbs.). All of a sudden, he was a tall, strong defenceman who could skate and handle the puck well. Koivu returned home in 2003 and played for two more years in the second division. He was called up to play for JYP Jyväskylä late in the 2004-05 season and stayed the next two full years there, but it wasn't a satisfying experience. He considered quitting, but then Norway emerged as an option.

"After I came back to Finland to play, I kind of lost the fun of playing," he admitted. "It sort of felt like I didn't know why I was playing. I didn't enjoy it. I was doing it as a job. At the end of the 2006-07 season, I was sitting at the rink, watching a group of kids play, and I wanted to have that feeling again. Then about five weeks later, I was sitting around, and I felt as though I still wanted to play the game. And again, somebody knew somebody who knew me in Norway, and that's how I ended up there."

So, in the summer of 2007, Koivu signed with Storhamar of the top league in Norway. Not only did he have more fun, he also helped take the team to the championship in his first year. "I had no family there, and I didn't speak the language, but I had fun," he said. "All the people in the city and the organization were really nice."

One year led to a second year and a third, and Koivu made Norway his home. Playing for his adopted country here in Slovakia meant giving up his Finnish citizenship, but that was not a difficulty for him.

"I'm not Finnish at all anymore," he said, matter-of-factly. "I had to give up my citizenship, so I'm all Norwegian now. It was no big deal. It's just a piece of paper. I was born in Finland, so that's always going to be my home country, but it's sort of nice to have a second home country, too. I have the chance to get good things from two cultures."

Indeed, his playing for Norway seemed inevitable from the time he arrived. It was only the details and administrative chores that slowed him down. "I only got my passport before the start of this season," he explained, "but then I had surgery on my right wrist and missed many months. It's an old injury, and finally the doctors said I should get it fixed. I came back for the playoffs in Norway, and now here."

"Even in my first season, people at the team were joking that I can play for the national team if I change my citizenship. But last year was the first time they really asked. I was wondering where I was going to play because I had the chance to play in other countries, but that would mean I don't get my passport, don't get the surgery."

Last summer Koivu signed with Lørenskog, had the surgery, and trained hard for the end of the season. Now that he's here, he is playing at the highest level of his life – and he's having a great time.

"It's a real challenge being here and of course a better calibre than the Norwegian league, but it's also really rewarding and great to be here. I enjoy the atmosphere."

And given how Norway has played, he's sure to come back whenever he wants. He has the name to be a star, and he's risen to the challenge so far.