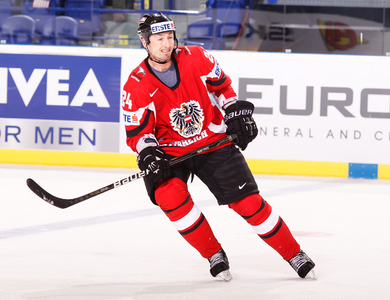 KOSICE – There is a breed of athlete that holds a particularly special appeal for anyone over the age of about 40. That's the athlete who, despite advancing years, can still hang in there with the kids. It makes all of us older guys still feel like we have a few good games left in us.

What over 40 pick-up hockey player isn't heartened by watching Niklas Lidström play like the best defenceman in the world at the age of 41? What 40-something international hockey fan didn't think it was pretty incredible when Chris Chelios skated in the 2006 Olympics for the USA?

Austria's Darcy Werenka, who will turn 38 in a few weeks, doesn't have the skill set of Lidström or Chelios – few do. However, what the Austrian veteran does share with both of those players is a love of the game that keeps him wanting to play, and savour every moment of elite competition, for as long as he can. If you're someone who's starting to slow down a bit, who takes a little longer to get loose before a workout – you can instantly identify with Werenka.

"I don't know how many guys of my age are still doing it, still having fun, keeping up with the kids," chuckles Werenka.

Werenka was a very good junior player with the Lethbridge Hurricanes in the Western Hockey League back in the early 1990s. He played on the gold medal winning Canadian team at the 1993 World U20 Championship in Gävle, Sweden, and has also played for Canada's national team at a couple of European tournaments.

"You get together with a bunch of Canadians who are from teams all over the place, you're together for a week or ten days and you just jell. Everything just feels so natural. That's the thing with Team Canada – no matter where people come from, you just kind of blend in and you're all there for the same goal.

"One of my fondest memories of wearing the Canadian jersey was winning the gold at the world juniors in Sweden, against [Peter] Forsberg. There's a lot of pride when you're wearing that jersey," says Werenka.

His career has evolved for the most part in the Austrian league, where he's spent the last eight seasons. Werenka was given the opportunity to become an Austrian citizen in 2008, and he proudly took on the challenge of helping to bring some of the passion he felt representing the country of his birth to his adopted country.

"They have a lot of their own passion and pride, don't kid yourself," emphasizes Werenka. "They're still a few steps away from the level where Canada is, but there are a lot of guys in there with pride and passion and, being a bit of an older guy, I try to provide a little bit of motivation and just give guys a feeling of being excited and being proud to play for Austria out there."

The inevitable question is: How much longer can he keep bringing that passion to the rink everyday?

"The fact that I'm Austrian and wearing their jersey in international competition has given me the chance to have, let's say, a bilingual pride," Werenka says. "I try to always remember that when you hang'em up, it's gone. So you have to appreciate every shift out there, every game for what it is, and just have fun with it."