The railway station has already begun to live with hockey 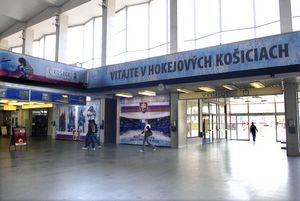 Visitors and citizens of the city of Košice are surprised by changing appearance of the railway station. Parts of entrance hall and especially the exit hall are decorated with large banners with the theme of Ice Hockey World Championship.

In the underpass, which leads from the entrance hall to the platforms, there are just a few panels with the flags of participants of to the championship. However, the exit hall looks completely different. There are four large boards mounted to the walls. The first with sights of Košice - the St.Elizabeth's Cathedral, The Jakab's palace, the St. Michael's Chapel and the State Theatre. Another board shows a nice view of the Steel Arena. The third is devoted to the theme of hockey, and the fourth to Slovakia, the organizing country of the championship. Dirty glass boards on the railing were covered by chipboards with hockey posters. The same will probably happen to the railing in the entrance hall.

"I like it, I think the citizens of Košice will not be ashamed," Alex from the Czech Republic, who works in Košice, said yesterday.