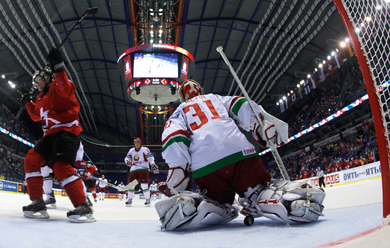 KOSICE – Ryan Gardner had two goals and an assist, and linemate Ivo Rüthemann had a goal and two assists to lead Switzerland to a 4-1 win over Belarus at the Steel Arena. The win gives Switzerland five points in the Group B standings and assures the team a spot in the Qualification Round. Canada remains on top with six points, and France has a single point from its two games. Belarus is winless in two games.


The top line for coach Sean Simpson played with SC Bern as a unit much of the season but was noticeably quiet in the team's opening day 1-0 win over France in overtime. Tonight they made up for it with a powerful show of goalscoring.

"Our first game was the first World Championship game for a lot of guys," Gardner started, "and we were nervous and not firing on all cylinders. Today, we got the good forecheck, and I think the big thing was we were skating a lot better."

Gardner got the only goal of the opening period on a play the team works on frequently. On the power play, Gardner went to the front of the net, using his huge body to create havoc. A simple Raphael Diaz wrist shot from the point was redirected by Gardner past a screened Andrei Mezin.

"Thats what I have to do. Thats my job. Im not a fancy player whos going to dance guys. I have to get to the net, and hopefully bang them home," Gardner explained.

Although Belarus tied the game early in the second, the Swiss blew the game open with three goals. First, Dmitri Korolov got the puck in the high slot thanks to some nice puck movement in the offensive end. He blew a low slapshot to the stick side of Tobias Stephan that the goalie couldn't handle to tie the game, 1-1.

Less than three minutes later, though, Goran Bezina made a nice play, taking the puck along the left-wing boards and cutting in front sharply. Mezin tried to pokecheck him, but Bezina protected the puck nicely and slipped it in the far side to make it a 2-1 game.

Gardner got his second of the game at 7:03 when a slapshot went wide to Mezin's right but bounced back in front on the other side. Gardner tucked the puck in before Mezin could get over in time.

The back-breaker came midway through the period when Rüthemann snapped a great shot over Mezin's glove on a short-handed breakaway. That made it 4-1 and proved an insurmountable lead for Belarus.

"Today we were skating way better," said Plüss. "We were able to pressure them. It was a whole different team from the first game, and were really satisfied with the way we played. It was a huge win."

Canada closes out its Preliminary Round with a Tuesday encounter with Switzerland while Belarus takes on France later that same night. The winner of that last game advances to the Qualification Round while the loser heads to the Relegation Round.