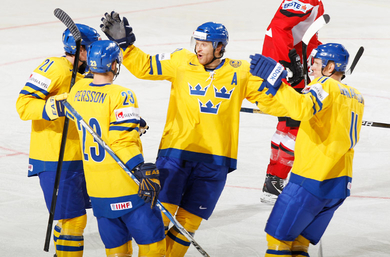 Sweden vs. Austria 3-0 (1-0, 1-0, 1-0)
With the win, Sweden moves into second place in Group C with four points, guaranteeing Tre Kronor a place in the Qualification Round starting Thursday. With the loss, Austria remains in last place, still with no points.

"We came out in the first period and played terribly," said Persson. "They had some chances, and they could have easily scored a couple of goals. But after we got that first goal, we started to play our game. We created a lot of chances, got another goal, and finished in a good way."

Sweden got the only goal in a dull opening period, enlivened only by a missed Austrian breakaway and a flurry by the Swedes in the final minute. David Petrasek took a slapshot from the point that was blocked, giving Oliver Setzinger a lengthy breakaway. He tried to deke, but Fasth was there with a left pad save.

The Swedes woke up in the final couple of minutes, pouring shots on Fabian Weinhandl who hadn't been particularly busy to that point. Then, off the rush, Loui Eriksson made a great pass through the slot to the back side where Persson had the wide open net staring at him. He didn't miss.

Persson's second goal of the night came in a second period which can best be described as a defensive struggle. But a Petrasek point shot found its way through, and Persson redirected it in the slot past Weinhandl for a 2-0 lead.

"It was a much better game for me tonight," Persson acknowledged. "I didnt have a very good first game."

The Swedes had a 5-on-3 soon after but failed to generate any decent scoring chances, but the smaller, and physically weaker, Austrians had trouble establishing a presence in Sweden's end long enough to get many decent shots of their own.

The final goal came on a third-period power play, again starting with a Petrasek point shot. This time, Weinhandl kicked out the blast with his left pad, but Magnus Pääjärvi was right there to snap in the rebound.

Sweden concludes its Preliminary Round on Wednesday with a game against the United States which will decide first place in their group. Austria and Norway will play earlier to avoid the Relegation Round. Austria needs a win in regulation time to make the Qualification Round while one point would be enough for Norway.