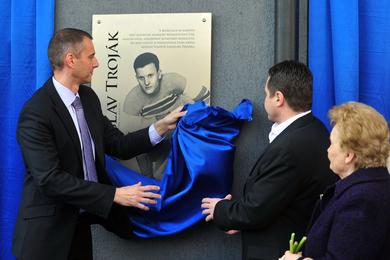 A commemorative plaque dedicated to Košice native and noteworthy Czechoslovak hockey  player Ladislav Troják was officially unveiled on the facade of the Košice Steel Arena stadium  today. Ladislav Troják is to be inducted into the International Ice Hockey Federation (IIHF) Hall of Fame during this years World Championship in Slovakia.

The name Ladislav Troják is associated with the history of hockey in eastern Slovakia and especially in Košice. Troják was the first Slovak to wear the Czechoslovakia hockey top in 1947, and went on to become World Champion – playing for the national team 75 times and scoring 37 goals.

This stalwart of Košice hockey was born on 15th June 1914 in Košice.  Troják played hockey in his hometown up until 1934, and later - until his tragic death - for LTC Prague, with whom he won five titles. At the 1948 Winter Olympic Games in Swiss St. Moritz he was the engine of the Czechoslovak team. Ladislav Troják and five other players from the Czechoslovak team were killed in an air crash in November 1948 when their small plane crashed over the English Channel. Since 2002, Troják has been a member of the Slovak Hockey Hall of Fame.

The Kosice winter arena - which was built in the city in the early sixties of the last century –bears his name and in its place now stands the modern Steel Arena – the Ladislav Troják arena.