Richard Zedník: We are ready for Swedes 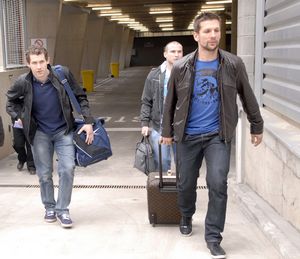 Slovak national hockey team met yesterday afternoon in Košice. The team under the leadership of the Canadian coach Glen Hanlon is playing preparatory matches with Sweden in the Steel Arena tomorrow and on Friday at 5.00 PM. The matches are part of the preparation for the forthcoming world championship.

Three participants of Slovak extra league finals also trained in Steel Arena yesterday. The winner, Košice, was represented in the national team by a goalman Julius Hudáček and HC attacker Vladimir Dravecký. The defender of Poprad team Ján Brejčák was also invited by the coach Hanlon. The hockey players who competed in our highest competition for gold last week thus met in one locker room. Trio of Surový. "Tomáš was driving, so I could relax," said the experienced hockey attacker, who comments on the two matches with the Swedes: "We are ready for the Swedish. Its a good rival; these will be good matches, and definitely a good preparation as well."


Zedník spent the last season in Sweden, playing for AIK in Stockholm and so he knows Northern players. He even played in the club with the two of them - a goalkeeper Viktor Fasth and a defender Stefan Johansson. "Sweden is of good quality. It will be a good preparation. I believe that they will test us thoroughly. Swedish are good at defense, they have a good goalman," said Zedník yesterday, who came to the meeting as one of the last.