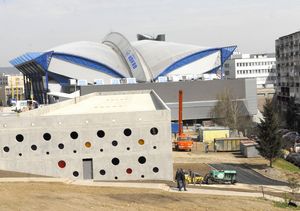 Otto Brixi, representative of the city of Košice for the organization of World Ice Hockey Championship informed about several .organizational matters related to the ice hockey championship. There will be 8 Park & Ride facilities for cars and 3 for buses in the vicinity of major shopping centers during the World Championship.

"On Wednesday we will test the traffic in the city, it will begin two and a half hours before the duel with the Swedish," says Brixi. " Jánošíkova, Žižkova, and Nerudova streets will be closed, Kukučínova street will become
a two-way street. Municipal and state police will to check motorists enter the closed areas and only cars with special permits will enter those areas."

Navigation is not completed yet. Yesterday we tried the navigation system to Park & ​​Ride facilities at the housing development Mier. The sign with the words "Park and Drive led us to Tesco hypermarket on Tralejbusová street. Another sign was behind the crossroad at the shopping center, the arrow pointing to the right. Drivers, who do not know Košice would get lost at the turn. We turned right later and we got to the motorway feeder road to the city center. Then we got up to Vyšné Opátske and the housing development Nad jazerom. Under the bridge at VSS we went towards Alejová street where we were welcomed by another sign board. One arrow pointed to the right (we got nowhere), and the straight arrow led to Park & Ride facility at the OC Optima.

"The reason may be still missing signs, which are closely related to those already mounted. Together they will form an effective navigation system and drivers will not get lost while looking for parking facilities. A total number of all signs should more than four hundred, "said Brixi.

Slovak ice hockey players will play preparatory match with the Swedish today and Friday at 5 PM in Košice Steel Arena. In this context, there will be minor changes in public transport; a new temporary stop will be added at the "hockey sanctuary".

During the game on Wednesday, the changes will be made in public transport, which will affect mainly tram transport.
In time from 5.15 PM. to about 7.30 PM. a special line No. 5 will run on normal route: Staničné námestie (Station Square) - City Centre - Ice rink (Steel Arena) - OC Optima.

"From about 3.00 PM to about 8 PM lines R1 will also have a supplementary board bearing the number 5," said Monika Murová, , a spokesperson for public transport company in Košice (DPMK) yesterday. On Friday, April 15, the changes will not impact the tram transport. DPMK will add supplementary buses on Wednesday and Friday if needed. All trolley lines and complimentary buses driving around Steel Arena to the city center will stop at the temporary stop in front of Steel Arena after the game."

This stop will be established only for the preparatory hockey games. According to Murová, it is a part of the traffic measures that will be tested on Wednesday and Friday in the early evening hours.

Today preparatory match is the first opportunity to test newly constructed parking house at Steel Arena. Motorists will have the chance to test how the system works. There are 496 parking lots underground and on the roof.
The building, which aims to tackle problems with parking at the ice hockey stadium, is ready for the first crowd, even if it will be only one day trial operation. Then it will be opened again during the game on Friday and after that it will be closed again. It is necessary to fine-tune some minor details. Daily operation will start on April 20.

The parking house will be completed after the championship. Waterproof coating surface will be finished on one half of the roof car park. Parking will not be restricted during the ice hockey championship, but we will have to return to it. Otherwise everything is ready for the first drivers in the parking house and for this time it will be free of charge. Parking fees will be effective later, " we learned from the Deputy Director of the company Asset Administration of the City of Košice, Štefan Rychnavský.

The operator also wants to install a variety of barriers, increasing safety. Today the whole system will be running as it will operate in future, drivers will be informed about how many parking lots are vacant, how many are occupied, while parking is at this time free of charge.
Parking fees are already set and from May 15, it will cost 80 cents per hour throughout day and at night from 10 PM to 7 AM only 30 cents per hour. Residents were not left out and they will pay only 1,5 EUR per 24 hours during the championship. This service must be ordered and will be valid for one month only. Then they can order the parking lot again.

All routes in the parking house are marked by horizontal and vertical traffic signs, ramps are located at different locations, somewhere in the middle, and drivers need to test a new space on their own.
"Navigation should not be a problem. What is special is that the speed limit in the whole building is only 10 km / h and there is height restriction, which is 2.1 m. There is a steel ramp at the entrance to the parking house. It will disable higher cars or cars with freight on the top to enter the parking house and can cause possible damage to the vehicle, "warns the operator.

Walking exits are ready at four locations. Special routes for motorists, however, are not built. Parking house is monitored by camera system and there will be the permanent service in a control room. Communicators are installed at each automated cashier machine.