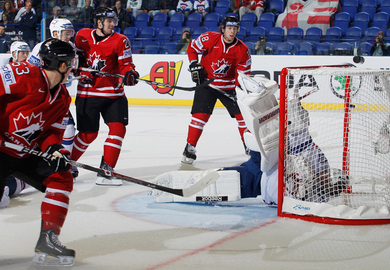 KOSICE – Jeff Skinner led Canada with two goals, with the second one coming on a third period penalty shot, to a 9-1 win over France. Skinner, who leads the team in scoring with five points, also added one assist. Its only been a couple of games, but the players feel that things are coming together nicely.

"Weve been together a couple of weeks now and weve been developing some chemistry," said Skinner. "In a game like this, its a good time to develop good habits and to figure out where everyone fits in on the ice. We also talk a lot on the bench and thats a good time to figure things out."

Canada now has two wins and six points in Group B and will finish up preliminary round play with a game against Switzerland on Tuesday. France is winless in two games and next play on Tuesday against Belarus.

The French started on the wrong skate, with Sacha Treille taking a hooking penalty just sixteen seconds into the game. 46 seconds into the power play Marc-Andre Gragnani banged Jason Spezza's rebound up top on the short side behind France's starting goalie Cristobal Huet.

Spezza got lucky a few minutes later when he fired the puck towards the front of the French net and it found its' way off the skate of French defenceman Vincent Bachet and in behind Huet. Skinner rounded out the first period scoring, making it 3-0 Canada, when he beautifully controlled a puck in close against Huet before pulling it to his backhand and knifing it into the top part of the net.

Canada led 5-1 after the second period and added another four goals in the third. Rick Nash had one goal and one assist and John Tavares and Dion Phaneuf each picked up two assists. Canada outshot France 39-33.

On the probability scale, the chance of France defeating Canada at this tournament would fall somewhere near the "highly unlikely" end of things (France now has one win in eight games vs. Canada at the World Championship). As the Canadian team saw it, the possible upset scenario would have involved Huet (272 NHL games played) having "one of those games". As it turned out, they needn't have worried themselves. Huet didn't have "one of those games" and was pulled after the first period.

Canada took five minor penalties in the first two periods, giving France 7:00 on the power play. In this case – power play time to a team that isn't much of an offensive threat – it wasn't a decisive issue. However, by design or not, the Canadian team did seem to adjust in the third period, staying out of the penalty box.

"The penalty kill was huge for us, especially in the second," said Skinner. "We battled hard in the third and got the job done."