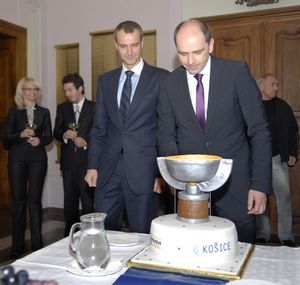 Košice certainly is the capital of hockey. We have master hattrick and a great fan background. Yesterday, before the preparatory match, the Mayor welcomed the national hockey team in the historical Town Hall in Košice. And the team even got a cake!

The upcoming world championship, which will be held in several days, is the event of the decade. The national team of Sweden will play a preparatory game in Košice today. Mayor Richard Raši used this unique opportunity to welcome the Slovak national hockey team in the historical Town Hall. The Mayor wished them success and many winning goals and he also expressed the maximum support from all people from Košice.

The regional association of Hornád municipalities, civic association "Mamám Slovenska" (To the mums in Slovakia) and magazine "Torty od mamy" (Mum cakes) showed a unique way of support to our national team players. They gave them a nine-kilogram cake in the shape of the winners trophy because they wanted to motivate them to win a real trophy. Another sweet marzipan delicacy was a cake in the shape of the ice rink with mascot Goooly.

The players promised not to disappoint their fans and to represent Slovakia well. The Mayor received a hockey stick from the players and they have signed in the guestbook. "We cross our fingers for you," said Richard Raši and then they began to cut the cake symbolizing the sweet victory by hard hockey players hands.